Frank Pignatelli Sells Out His Clients?

Whoa.  Looks like I was late to the party.

I just ordered this book after reading this excerpt on Google Books.  If you want to preview a book before buying, check out Google Books.

Where is the Catholic Outrage?

When gay people dared to get married, Catholics took to the streets.  They protested.  They showed their outrage.  Where are those Catholics now?

INDIANAPOLIS - Church documents show the Archdiocese of Indianapolis knew about alleged sexual abuse by one of its priests while it was occurring but reassigned him to other churches and never notified police, The Indianapolis Star reported.

Church documents show that two former Indianapolis archbishops -- the Most Rev. George J. Biskup and the Most Rev. Edward T. O'Meara -- were aware of the abuse allegations at the time, but didn't report them to police and continued to assign Monroe to new parish positions. Church officials also sought mental health care for Monroe through a clinic that treated troubled priests from across the United States.

Why do Catholics care more about adults getting married than about children being molested?  Catholics all say, "We condemn priest abuse!"  Well, where is the outrage?  Where are the protests?  Why do I see you in the streets marching against gay marriage, but not marching against the child molestation that occurs under your own roof?

Where are the boycotts?  Whenever a company does something "immoral," Bill O'Reilly and other prominent Catholics call for a boycott.  What is worse than child molestation? Why, then, are no Catholics organizing a boycott of the Archdiocese of Indianapolis?

Talk is cheap.  When I see the protests and boycotts, I'll believe that Catholics actually care about priest abuse.  Until then, the only rational inference to make is this: Catholics view gay marriage as more harmful to society than child molestation.

Out of several million commercial flights, how many emergency water landings have there been?  One.  That's it.  Statistically speaking, none of us have any change of drowning after an airplane we were on crashed into the ocean.  It is literally more likely that lightning will strike you several times than it is that you will die while flying on a commercial airplane that makes an emergency water landing.

Yet that one water landing occurred very recently, and so the availability bias comes into play.  The availability bias "is a phenomenon (which can result in a cognitive bias) in which people base their prediction of the frequency of an event or the proportion within a population based on how easily an example can be brought to mind."  Since we just had an airplane land in the water, something must be done about the "problem." And so we have this:

DALLAS (AP) -- American Airlines is limiting the number of passengers on some planes while it orders additional life rafts needed in case of a water landing like the one made this month on the Hudson River by a US Airways jet.

American will allow no more than 228 people including passengers and crew on its Boeing 767-300 aircraft, which normally holds 236 people including a crew of 11, spokesman Tim Wagner said Wednesday.

Putting aside the irrationality of preventing a non-existent problems, let's look at the cost.  Assume the average ticket price is $600.  For every flight, American Airlines will need to recoup an immediate $4800 loss (8 fewer passengers time $600 per ticket).  Multiply that by thousands of flights, and you're talking about millions of dollars a year.

Millions of dollars to solve a problem that does not exist?  Bad thinking is expensive.  Even at $50, this book might be the best bargain of your life.

Entrepreneur.com recently wrote a favorable profile on Agape World, which has now been revealed as a Ponzi scheme.

Does Entrepreneur.com even investigate companies before giving them the Hot 100 stamp of approval?  How many investors did Agape fleece because of Entrepreneur's favorable press coverage?

Here is the link to the favorable profile.  I wonder if Entrepreneur.com will admit to its negligence; or simply disappear the story from the Internet?   For the truth's sake, I took a screen shot. 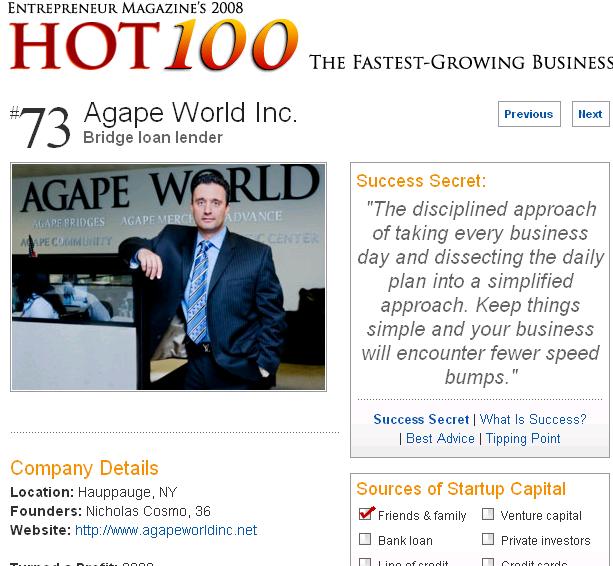 A Long Island, New York businessman was arrested for perpetrating a $380 million Ponzi scheme.  I did some research, and came across some interesting information.  People were on message boards asking about Agape World.  Here was one (unedited) post:

Has anyone invested with Agape World Inc? They provide bridge loans, and offer investors 13-14% returns.?
When my brother was telling me about it, it sounded kinda fishy and risky.
What also turned me off is that the guy who told my brother about it told him that he's made
1mil just investing. He also mentioned that he gets a percentage out of people he signs up.
Sounds like a pyramid or mlm, scheme whatever you want to call it.

Can anyone provide any info on this company. I've done searches on the web and can't find anything.
The only info I've found has been in yahoo answers and those posts could've been posted by someone from
Agape.

As is the case with most Ponzi schemes, investors let their greed get the best of them.  If you read the responses to the post, however, you'll note that people in the Internet were telling the poster to stay away from Agape.  This is further proof that freedom of information, rather than the SEC, is the best defense against scammers.

Interestingly, people were shilling for Agape World on online message boards.  Here was a post from another message board:

I know the guy Brad who is one of the fund managers. They are very good but picky. They only fund 50-55 deals a year. I work with them on the other side raising money for the bridge loans. They they like your deal it will fund! They are the real deal!

That poster was, of course, attacked by skeptical posters.  I wonder, though, whether that poster was an overly enthusiastic victim, or a co-conspirator?  I hope authorities, unlike Agape's investors, do their due diligence.  This means researching message boards for clues into the scope of Agape.  Start issuing subpoenas to determine who said what about Agape - and when.

Another couple of dozen people lost everything:

A New York businessman sought by federal authorities in connection with a suspected $380 million Ponzi scheme has been arrested and charged with one count of mail fraud.

He was taken in handcuffs to the United States Postal Inspection Service in Hicksville Monday night.

Amazon.com's e-book reader, the Kindle, may be re-released in upgraded form on February 9th.  Rumors here.

Am I My Neighbor's Keeper?

This sad story involves people not accepting responsibility for their neighborhoods:

Officials in central Michigan say a 93-year-old man who owed more than $1,000 in unpaid electric bills froze to death inside his home -- where the municipal power company had restricted his use of electricity.

Neighbors and friends of Marvin Schur want answers as to how this could happen.

"Now that we do know it was hypothermia, there's a whole bunch of feelings that I’ve got going through me," said Jim Herndon, a neighbor of Schur's. "There's anger, for the city and the electrical company."

Mr. Schur died because he neighbors didn't give a damn about him.  Each person has the right to decide whether to give a damn.  No government should compel us to be our neighbor's keeper.

If you truly care about other people, do something yourself.  If you choose not to help others, don't try shifting the blame onto the government.  You made the choice not to help.  Take personal responsibility for your own choices and your own neighborhoods.  If you don't, spare everyone outside of your neighborhood the outrage.

Obama's Alphaness in All Its Glory

Can anyone imagine George W. Bush doing this:

The high-flying execs at Citigroup caved under pressure from President Obama and decided today to abandon plans for a luxurious new $50 million corporate jet from France.

Suck it, conservative betas.  Go cry yourselves to sleep.  Leave the real work for the alphas of the world.

Will conservative "thinkers" praise Obama for his actions?  I'm a libertarian who did not vote for Obama.  Intellectual integrity requires that one praise those who do right - even when those who do right are one's ideological opponents.